My name is Andrew, developer of Shadow Multi Cast software and professional consultant.

I offer both the essential 2D Shadow Diagram software for AutoCAD called Shadow Multi Cast (since 2003), and I also provide professional shadow diagram services in Australia.
Shadow Diagram services aren’t just for Architects and buiding design professionals either. If you have a proposed development of any type adjacent to your property, we can provide professional expert independant analysis of the overshadowing to your properties windows, private open space (such as back yards, patios and courtyards), gardens and veggie gardens, as well as shadows over any solar panels you have.
It is crucial to obtain professional drawings and analysis in critical projects if the proposed building work could impact on your amenity. Independant professional analysis is valuable to check shadow diagrams provided by the party planning on the proposed building work, as sometimes shadow diagrams are prepared incorrectly which could have implications to your own property.

Shadow Multi Cast is 2D Shadow Diagram software designed to be installed as a part of your AutoCAD tools. It works on 2D AutoCAD drawings without needing to create a 3D model.
Locations available cover Australia wide with software pricing starting at $39 AUD.

Who Should Have Shadow Multi-Cast™ for creating Shadow Diagrams?

Architects
Landscape Architects
Building Design Practitioners
Drafting Pracitioners
And all involved with local planning laws where overshadowing is an issue and shadow diagrams are required.

What Does It Do?

Shadow Multi-Cast‘s main function is to SAVE YOU SERIOUS TIME & MONEY in creating shadow diagrams to assess overshadowing onto neighbouring properties.

Shadow Multi-Cast is an essential tool that is used inside of AutoCAD ® to quickly and easily create accurate 2D shadow diagrams within your AutoCAD ® drawings. It not only generates shadow lines at lightning speed, it also includes other time saving tools to aid you throughout the process of creating shadow diagrams and preparing drawings for plot.

Shadow Multi-Cast will then automatically : 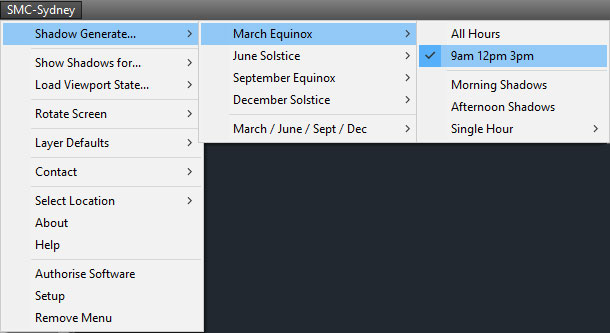 Simply repeat steps 2 & 3 until you have completed generating shadows. Shadow Multi-Cast can generate shadow lines for every hour of the day for June, September & December in one go!!!

Shadow Multi-Cast can also be customised easily so layer names and colours can be set to your office standards by
default.

Shadow Multi-Cast is so efficient it can pay for itself in just a few projects.

What you Need
Shadow Multi-Cast can run on both full versions of AutoCAD 2004+ and also LT. There is a special version for LT users. Currently LT versions are only available for Melbourne and Sydney.

Shadow Multi Cast is designed specifically for aiding in the preparation of 2D shadow diagram studies for town planning / DA submissions in Australia and New Zealand.
Shadow diagram studies are used for observing the overshadowing potential of a proposed development onto existing residents of the immediate area. A shadow diagram shows the length of the shadow that will be projected from the proposed building or building addition.
This information is used by both the council and building designer to analyse the potential loss of sunlight on neighbouring open space such as lawns, gardens, decks and terraces etc. This type of study is also being used more and more for analysing overshadowing onto roofs (in terms of solar access for solar power panels), and the overshadowing onto neoghbouring habitable room windows.

The altitude and azimuth of the sun changes throughout the day, that is why councils will require at least 3 hours of the day to have a better understanding of the overshadowing from the proposed building works. The basic hours required are usually 9am, 12pm and 3pm. In Victoria, those hours are based on the sun movement for the Equinox on September 22nd. In New South Wales, many councils prefer to see these hours for the Winter Solstice (Junes 21st).
Sometimes the minimum 9am, 12pm and 3pm hour guidelines are not enough information for the council to make a decision on the total impact of the proposed building works. In these cases, they may wish to see every hour from 8am – 4pm during a given time (usually the Winter Solstice and/or Equinox.)